A Few Days in Songkhla 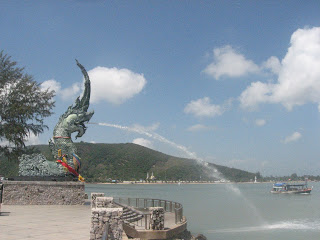 Recently, to soothe the wanderlust, I went on a brief sojourn to deep southern Thailand. I have been to a handful of coastal destinations in southern Thailand, most of  the usual suspects : Koh Phanghan, Koh Chang, Chumphon, Koh Lipe, and Krabi.  One of the closest coastal  destinations to Penang is Songkhla and it has been on my radar for awhile.  Upon a fine recommendation from my friend Ken, my decision was made, Songkhla here I come!

I started off staying one night in nearby Hat Yai, which is the third largest city  in Thailand.    The area where I stayed was not  pedestrian friendly with few usable sidewalks and plenty of traffic.   I wandered around a bit in the evening and found some so-so food,    I ended up in the massive new Central Festival shopping mall and looked around for awhile, they have shops aplenty.  I wasn’t feeling it in Hat Yai so the next morning I decided to leave for the seaside and  Songkhla, 25 kilometers away.  I did manage to find a good Thai breakfast joint close to the hotel before I left, the staff were super friendly.  If I make this way again, I will do more research on Hat Yai and find out where the fun is.

Upon being dropped in the center of Songkhla,  I had my first of many motorcycle taxi experiences.   If you pack  light it is easy peasy.  I did find the price haggling a bit tedious, not like dealing with  taxi drivers in the mean streets of Calcutta, but a pain nonetheless as I had no clue about prices and the drivers could tell.  Anyhow, 30 baht  ($1)got me just about anywhere so  no biggie and I got a few fun moto rides out of it.

Songkhla has a real chilled out vibe to it, a great place to wind down.  It is a well developed seaside  town so I was surprised how few Westerners there were  out and about.  When I took the  short, fun car ferry ride (free for pedestrians 🙂  to the Muslim village across the lake, I was like a rock star over there.  I would say 9 out 10 people there waved or said hello to this kooky Westerner walking around their village.  Overall really friendly folks in Songkhla, though their English is limited.  About time I learned to speak Thai, chai mai?

I stayed on the ‘lake” side of town with the lake actually being a large salt water lagoon.  The opposite side of town faces directly on the Gulf of Thailand and the first evening I took a long walk on the beach there.  The first impression was not great as there was plenty of garbage washed up all over.  There was long barrier of giant sandbags along this part of the beach to protect against the waves, as were really pounding the shore . Red flags were up everywhere with no one daring to swim.  As I walked further north, the beach got cleaner and calmer. The  BP Samila Resort has a sweet spot  right at northern tip of  town.  Also around here is the famous mermaid.  She is very  popular for photos, alas I didn’t get any quality alone time with her. 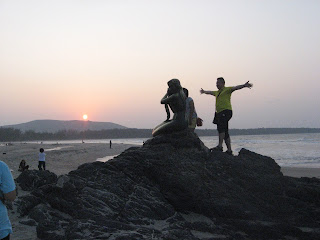 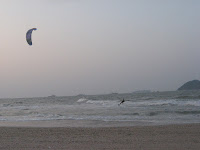 The food scene was tasty and interesting.  My hotel was right by Nang Ngam street which is renowned for it’s many local specialties. Mango sticky rice was once a big Thai favourite of mine but I grew weary of it and haven’t had it in ages.  After having some  here,  my faith has been restored.  I also had the tastiest jok ever here,  hard to believe something as simple as rice porridge could taste so good.  There a few places geared for tourists too. with the Canadian/Thai partnership called Blue Smile a fave. 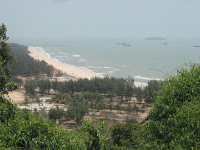 One morning I made my way to Tang Kuan Hill AKA monkey hill.   The hill overlooks Songkhla and the sea.  At the base of the hill there are, you guessed it,  a big troop of monkeys.  When I arrived there were a few monkeys working this guys truck over, tearing the trim off the roof.  I suspect he may have stiffed them on the parking  😉 For a small fee you can take a fun cable car ride up the big hill and get a great view of the town and seaside. 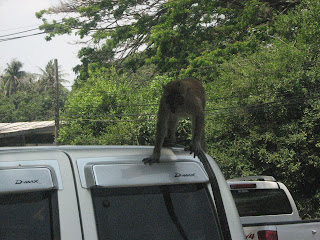 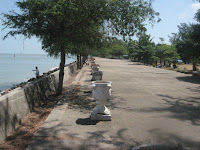 Actually, the place I enjoyed the most at Songkhla was  a peaceful little marina and park close to the aquarium and the ferry I mentioned above.  There were big gardens with good bicycle paths and walk ways, along with a sprinkling of beach cafes and coffee shops.  Several Thais were leisurely fishing along the shore, many with a beer or two close at hand. If I return  I could see myself getting a bicycle and whiling away many an hour at this place. Overall, Songkhla left me with a good impression,  worthy of another visit for sure.

Where I stayed
In Hat Yai, I stayed at Chudchada place,  not bad value at 550 baht as the room was huge.   There was cable TV, air con, fridge with 2 bottles complimentary water, comfy bed and wifi (which only worked in the evening). The location is close to the giant Central Festival mall and the bus terminal. Other then that,  I did not find much else interesting in the area. Staff are friendly and helpful.

In Songkhla, I stayed  at the Lake Inn Hotel and took the lake view room for 700 baht  The decor is a little tired, especially the rugs in the hallway which really have to go. Decor aside, it is quite alright with cable TV, air con, fridge with 2 bottles complimentary water, comfy bed and wifi working well the whole time.  The location is good, right by the great food street Nang Ngam. The cleaners were good and reception was friendly, though they couldn’t answer my questions about transport.  I would stay here again, though perhaps not with the lake view room as there is a working dock in front, noisy at times.

Getting There and Away from Penang
The options I looked at for this trip included planes, trains and automobiles.  There is no direct flight from Penang to Hat Yai so that came off the list straight away.  The train trip is rather pleasant, as I covered in my blog here,  however it didn’t look like there were seats available.  No matter,  the option I really wanted to test was by mini van.  There is an agent close to where I stay so I inquired about the price, really good at 40 RM with a few different departure times. I could be picked up right by my home,  I just had a book it the day before.  The day before I wanted to leave I called the agent up and it was full the next day and only 5:30 AM the day after.  Not so appealing.  Instead I  went to the big bus station at Komtar to see if they had something better.  Indeed, they had a seat for departure at noon the next day, perfect.

We got rolling about a half hour late, no big deal.  Ironically we ended up going right past my home,  I should have asked if they could pick  me up when I had bought the ticket.  The van was quite comfy and I got seated by an older gent from Canada.  Like me has spent a lot of time in SE Asia and we exchanged  travel tips along the way.   We changed vans at the border, a minor inconvenience.  I was amazed that they dropped me off right at my hotel doorstep in Hat Yai. In total it’s about a 4 to 5 hour journey.

The trip back was not quite as smooth.  For starters, I was in Songkhla so the first step was to get back to Hat Yai.   There are minivans that run fairly regularly on this route.   I got  a motorcycle taxi from the hotel to the minivans and we departed  soon after.  The van slowly winds it’s way around Songkhla picking up passengers until  it is full, which turns the 25 km journey take into a 1.5 hour mission. This trip costs 28 baht and to collect the money, once everyone is aboard the driver passes a little basket amongst the passengers who put their money in basket, taking change as needed, and passing the basket along and finally back up to the driver.  It’s kind of cute, reminded me of the old church collection plate.  I got dropped at the Hat Yai bus terminal at 11:15, great timing because minivans are due to depart around 12.   If fact the agent said pickup would be at 11:30. Good, I thought, maybe we’ll arrive in Penang a little earlier.  The cost was 450 baht which I thought was little high considering the Malaysia price.  I regret not checking with the other agencies close by, there may have been a better deal.

The van was there right on time, it was more tattered than the Malaysia van and the air con barely did a thing in the 35 degree heat.  We went  to a few hotels around town collecting more people.  We finally  got out of the city, only to have the driver pull over on the side of the road in the middle of nowhere.  There we sat in the heat  waiting for another couple  who finally got dropped off after about  40 minutes.  So much for getting to Penang early!  While waiting for other passengers after I cleared customs, I told the  driver the area of Penang I wanted to get dropped off, he said no can do, he was only going to the Komtar station.  He asked a fellow driver if he could drop me at my area, he said no problem.    This was stroke of good fortune as the van was much nicer and the driver was excellent.  I got dropped right at my doorstep. Moral of the story is, it’s always a good idea to make a request when there are still other options available.