Roti Canai at Kampung Siam, Penang….End of an era??

Roti Canai is a fun Indian snack with the roti (bread)  first kneaded to  an almost paper thin layer, then cooked on  a large griddle and fluffed up with a flourish on the plate.  Usually it is served with a curry lentil sauce and other condiments. 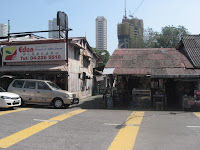 I found out about the best little roti canai stand in my Penang ‘hood because of an article in the paper about the kampung (village/neighborhood) it is located, called kampung Siam.  It is about 200 years old, one of oldest kampungs in Penang.  Sadly the article explains how the residents and businesses have all been given eviction notices.  Somehow a developer bought the village out from under the residents, some whose roots go back to the inception of the village all those years ago.  It is a good  article, you can find it here.

It took a bit of searching to  find the little hole-in-the-wall roti stand,  just a few meters down from the police station.  Walking in there was liking stepping into a whole different world.  The staff, the customers and passersby all make up an interesting cast of characters. I can’t say it felt Siamese (Thai) but it surely did transport me back to India.  I don’t know what language the staff spoke but I suspect it is Tamil.  Luckily I have passable pronunciation of roti canai and teh tarik, a sweet, milky tea made delightfully foamy by pouring (pulling) back and forth between two vessels.   The roti canai was average but no complaints whatsoever for 1 MYR ($0.33 CDN).  The teh tarik was good and also 1 MYR.  I asked the guy across from me about his yummy looking dish and it was an old favourite of mine from traveling India, idli,  a spongy, savoury cake.  I ordered my own idli and this really put me in flavour country, so good.

I just found out about this place but would still be quite sad if it gets leveled.   There is only one old place like this ,so unique. What a shame if it gets leveled to put up another budget hotel, of which there are dozens upon dozens already.   Get your roti canai while you can.