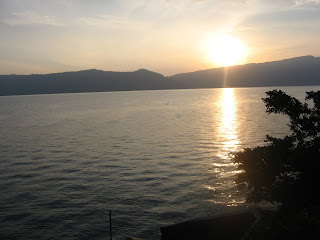 For my Sumatra adventure, I considered skipping this popular tourist destination, as when I  researched it, there didn’t seem to be a whole lot  to do there. Thank goodness I came to my senses in the end.  While it is true there is not that much to do,  Lake Toba is a glorious place to be doing very little. The people are friendly, there‘s plenty of good food/coffee and the climate is spectacular. Even though it is almost right on the equator,  the  elevation is high enough that it cools off to about a delightful 20 °C at night, just perfect for a good nights sleep. Every morning, I was greeted by this sunrise from my cottage balcony. In the end I  didn’t want to leave, I even tried to change my flight  to Java so I could stay longer  but it proved too costly.   Never mind, I will return.
The lake itself is a marvel of nature.  It is the worlds largest volcanic lake, in the caldera of a super-volcano formed after a massive eruption some 70,000 years ago.  How big was the eruption you ask?  Well, the lake is 30 kms by 100 kms and up to 500 meters deep. There is an island in it , Samosir, which is the size of Singapore.  Just imagine what a massive force it must have taken to open such a huge hole in the earth.

The main  tourist town is Tuk Tuk, located on Samosir island.   The accommodation is really  affordable and plentiful here. My traditional, lakefront cottage was huge, at least 40 m2. There was a shared bathroom attached to the side of the cabin that had hot water shower and a western style toilet with a discreet bidet option (haha I didn’t even realize this until a couple of days in). The customer service was minimal but there really isn’t much required here. With wifi and drinking water included, the grand total was a paltry 100,000 rupiah/ per night (about $8USD).

I did have one busy day here,  on a fun  moto tour of the island.  At Juwita Cafe, the owners son Kiki offers island tours for a nominal fee.   Kiki is proud of his homeland and is very happy to show guests all it has to offer.  I mentioned my keen interest in coffee so  after showing me waterfalls and some other picturesque sights, he took me to coffee farms way up on  top of the island.  Kiki has built a relationship with these farmers, who also grow the unique local Batak pepper which he is now marketing abroad. The ride was a lot of bouncing and a lot of hills as the elevation goes from 700 meters to 1,600 meters.  There are a loads of small, simple, low-income farms all along the way.   When we finally got to the top, there were coffee farms all around but most of the farmers happened to be away for some function at the nearest big city, Medan.  We did manage to find a woman who was left in charge with a whole army of kids to look after.  She gave an explanation of how they processed the coffee before selling the dried green beans at the market.  She had green coffee beans on hand and she let us have a look.   I asked if I could  take some with me to try.  She was going to just give me a whole bunch but I insisted on paying her for it.  In the evening after we got back, I roasted the beans in a wok over an open fire at Juwita.  We then ground the beans and made coffee,  simple  Indonesian style, by pouring hot water into the cup with the grinds.  Considering it was my first time roasting like that and our very basic gear,  the coffee was  quite good.  I really hope one day I can do something with these farmers to boost up their income and share their great coffee abroad.

If you want to see more of my  Lake Toba photos click here.

One day I was  bicycling around and went to an ancient local sight called “The Stone Chairs”,and there had one of two surprise Saskatchewan moments in Sumatra.   At this sight,  an older local gent saw me looking around and came over to say hello.  As is usual, he asked where I was from and he was pleased to hear it was Canada.  He had been to Vancouver in the 70’s when he was a sailor.  He said at that time he wanted to tour around Canada a bit but when he opened up the map he got overwhelmed by how big and spread out it was like Saskatchewan.  Now he could have mentioned any of the 10 provinces  but Saskatchewan stood out for him all these 40 year later. He even pronounced it correctly, I think  it took me about 5 or 6 years in school before I could. It was music to my ears.

Speaking of music, I may as well give you the second Saskatchewan moment.   After leaving Lake Toba I stayed one night  at the Angel Guesthouse in the big, nasty city of  Medan in order to catch a plane the next day.    The guesthouse is right next to huge Grand Mosque and the sweet landlady Susi is very Muslim.  I was going out in the morning and was a bit surprised to hear some contemporary music playing at the lobby.   Listening closer, I knew this song. It was “The Last Saskatchewan Pirate”!  This was about the last place on earth I expected to hear about the Jolly Roger on Regina’s mighty shores.

With it’s high elevation, weather is pleasant year round on  Samosir Island. Typically October-December is the rainy season.  July and August are high season.    I went in June the first time and the weather was absolutlely stellar,  sunny and calm with the lake often like glass.  It was also during Ramadan so there were very few local tourists traveling at that time.  The second time I went was in August, which is peak season as well as dry season.  At this time it still wasn’t overly crowded however the weather wasn’t as nice as it was quite windy, especially at Romlan.

Romlan  –  It is lakeside  and far enough  off the road  so there is no traffic noise, though you do get  jet skis roaring by on the lake.  As I said my cabin was a steal at 100,000 rupiah.   Next time I may try staying at Gokhon Guesthouse or Tabo cottages (pricey).

I took the tourist van from Bukit Lawang to Lake Toba. It is basically an SUV  with seating for about 8, though I got lucky that only 4 people booked. Traveling the main roads of Sumatra is a harrowing experience and our trip from Bukit Lawang to Lake Toba via Medan was no exception. Like there was that time our driver decided to pass a truck, that was passing a truck with another truck coming towards us at a great rate of speed.  Us white folks got a few shades paler but our driver didn’t bat an eyelid as he managed to pass with millimeters to spare.  Cost was 230,000 rupiah which included ferry crossing to Samosir island.  Nice touch is the ferry will drop you off right in front of your guesthouse.

Update: For my second trip there, I took the shared taxi from Medan airport to Lake Toba. The trip took 5 hours or so which included engine trouble and a stop at a garage (no extra charge 😉  The drive is nerve wracking but quite a good deal at only 80,000 per person.  You have to wait at airport for the vehicle to fill up to get this price.  You could likely hire the whole car for about 500,000. The company is called Nice Transport, they have a stand just outside the airport on the right hand side.

Next time I want to look into taking the train, which sounds much more relaxing.  There is one that runs from Medan to Siantar, which is not far from the lake.

ATM:
There are a few ATMs at Paraphat where you catch the ferry to Samosir Island.  If this isn’t convenient, there are ATMs on the island at the villages of Tomok and Ambarita.  I tried the one at Tomok but it didn’t work for me.   It was only giving 50,000 rupiah notes to a maximum of 1,250,000 so I wasn’t that keen to use it anyhow.  The ATM at Ambarita was much better, attached to an actual bank.  It gave 100,000 rupiah notes to a maximum of 2,500,000 and it worked just fine for me.

For an island tour, find Kiki at Juwita cafe or you can email him at kikiandrea07@yahoo.com

For travel agent, I booked my flight at Coffee2go.  The owner Lam also serves  great coffee, in fact I started going there every morning for gourmet Sumatra coffee and a simple breakfast.  She has gifts for sale including coffee and neatly packaged locally grown spices such as cloves, cardomam  and cacao beans which I loaded up on.