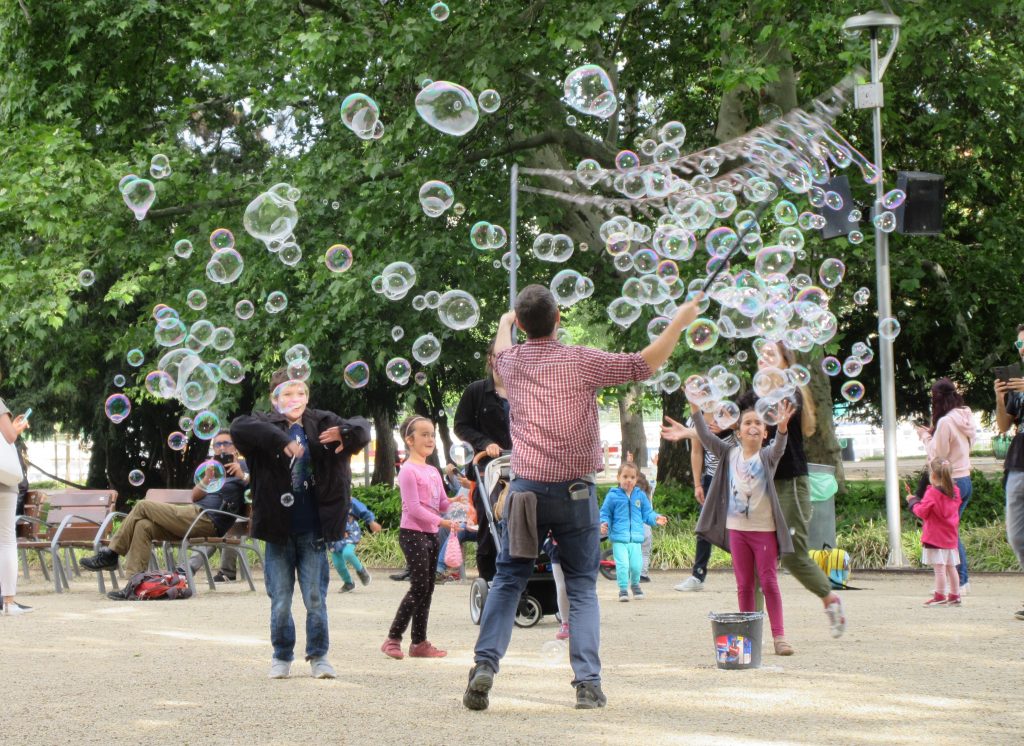 This was my second time to Budapest, what a stunner! I came in the early 2000’s and it has progressed a lot since then.  I found the people are more upbeat and energetic this time around.  The cityscape  was also more vibrant and beautiful, it seems to have shed the cold war feel it used to have on the Pest side . I stuck fairly close to the River Danube, really gorgeous wandering up and down the riverside, either on foot or via the adorable #2 tram.

I didn’t have any plan for activities in Budapest, I just wanted to soak up the ambiance. It worked out fine,  I spent six full days and loved it, though it went by all too quickly. Below are a few of the highlights.  I can’t wait to get back there again.

Links for my many Budapest photos, one album for the sights and one for the food

To do:
Free Walking Tour– There are a few variations, I had the basic English tour which took in a few of the most popular historical sights in Budapest It starts at Sant Istvan (Saint Stephens) Basilica .  The guide, Szabi, was very enthusiastic and proud.  He actually made me proud of my Hungarian heritage.  As the name indicates there is walking involved, a fair bit of it, including up Buda Castle Mount.  It was not too much.  At the end you have the chance to ask any questions that came up for you and also the time to tip the guide if you wish (they only get tips, no wage)  I gave Szabi 1000 Forint..Got good dining tips from him  You can just show up at Sant Istvan Basilica at the designated tour times but it is wise to book ahead online as the tours are popular. . Website is here

Dandar Thermal Bath–  Budapest is renowned for it’s thermal baths. They can get crowded but this one was not when I went on a weekday afternoon and it seemed like mostly locals. There are 3 different pools inside as well as a Finnish sauna (dry).  There are also 2 pools outside but I just went for the inside option.  Bring a towel and flip flops if possible.  Cost was 2000 Forint inside or 2600 to also include outdoor pools.
Margit-Sziget (Margaret Island) –  This island is must see of the city., uniquely situated in the middle of the Danube…  Parks cover almost all of the island with large verdant meadows, musical fountains and more.  There are two bridges (Margaret and Arpad) which are connected to either end of the island so it easy to access by foot, bicycle or city bus. 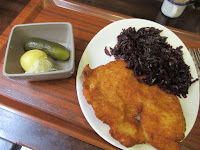 Belvárosi Disznótoros– Go here hungry, it is  a lot of food.  Not many seats but can stand at counter and eat.  I had a huge chicken schnitzel and red cabbage with pickle and stuffed pepper.  Tasty but it was too much for me. 2500 forint for all. By Deak Feerence Metro  1053 Budapest, Károlyi u. 17

Frici Papa Kifozdeje– good local foods and very affordable.  I had bean soup, large beer and palicsinta dessert for only 1600 forint.  Busy place, may have to wait a few minutes for a table. Kitaly U. 55

Hus Hentesaru – This is actually a butcher shop but they do serve cooked food at lunch.  You can eat there at the counter or takeaway.  The Hungarian sausage was excellent..

Doner Kebab Express–  There are a ton of kebab places but this is the only one I saw that consistently had a long line at lunch time.  I came by later in the evening when there was no line, boy is it tasty.  Only 500 forint. Kiraly U 1b, very close to Deak Ference metro

Gerbeaud Cafe–  A grand old cafe from Budapest’s golden era.   I had the retes along with a glass of the world renowned Tokaji wine.  It was a bit pricey but turned out very delicious.

This is the only place in Budapest that I caught a whiff of attitude from the waitstaff.

Coffee: (roughly in order of preference)
Rezkigyo Coffee House– huge cafe, low-key.  Had espresso and espresso macchiato, both very good.  Also had Hungarian scrambled eggs.  Tasty.  Paulay Ede u. 15, 1061
Espresso Embassy–  This was the most happening place,  always jammed.   The espresso was good, pour over just so -so.  Decor is rustic looking.  Sweet location just a couple of blocks from Sant Istvan Basilica
Kontakt–  had the pour over was a little better than Espresso Embassy one.  Serious bordering on pretentious about the coffee.
Little Mebourne – the coffee didn’t really stand out but the cherry pie was excellent
Barako Kavehaz–  A hole in the wall coffee joint serving coffee grown in the owners homeland, the Philippines. On the Buda side close to the bridge to Margaret Island.

One Week transport pass–  This is valid on all Metros, trams and buses including the 200E bus to/from  airport – city center.  I bought mine at the airport on arrival.   You just have to show the pass if asked , you don’t need to validate it each ride.   Your name is on the card and I was asked a couple of times to show matching ID..  At 4950 forint it was borderline whether it saved me much as a single ride is only 350 forint.  It is more convenient than buying tickets however you have to take care of the pass, don’t put it through the laundry like I did.  Luckily I had gotten 5 days out of it already.  If you use single tickets you have to validate for each ride and cannot transfer.  I bought a single for my trip back to the airport, also only 350 forint.  Tram 2 is very cool ride along the Danube riverside.

Sleeping:
Cherry Tree Studio– AirBnB hosted by Stefi (superhost).  The location was pretty good, close to Metro and only about 15 minutes walk from the airport bus stop.  The room is good though you have to climb up to the bed. The kitchen is really well equipped. The bathroom is not shared however it is quite a way from the room.  I had a look at the other room (Birch) with attached bath but still prefer this one.  Paid $34.04 CDN per night.  Ask Stefi where to find the good retes (strudel), thermal baths etc

Sim Card
Telenor – They seemed to have a little better deal than some of the names I was already familiar with like Orange.  The cost was about 3500 forint total which included data and voice.  The card worked fine for the 2 weeks or so that I used it, including in Hungary, Italy, France and Germany .