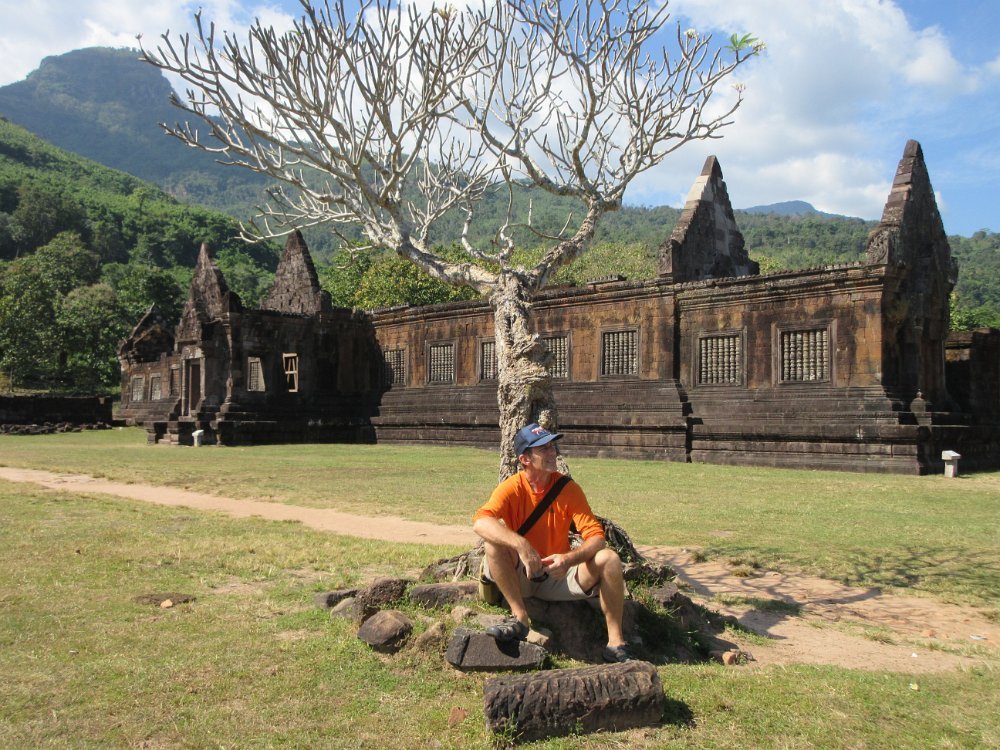 I  have been traveling to Laos often over the past decade and have longed to visit the South for it’s many attractions such as the UNESCO heritage site Wat Phou, the Bolaven Plateau with it’s abundance of stunning waterfalls and superb coffee plantations and the 4000 Islands area of the Mekong River.  I finally made this trip recently and was  really wowed by the area. .Part 1 of the journey starts  along the mighty Mekong River, based in the  charming village of Champasak, just up the river from the Wat Phou heritage site.  Part 2 is the Bolaven plateau with it’s cooler temperatures, hot coffee and abundance of waterfalls .  I will cover that in my next blog.   Ran out of time to see perhaps the most popular attraction of all in the area, the 4000 Islands. Saving that one for next time. 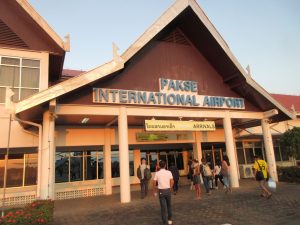 We flew into the bustling main city of the area,  Pakse, nestled on the banks of the Mekong River.  From there it was a quick van ride along the river to our accommodation in the sleepy little town of Champasak. The Mekong is very wide and impressive here. As in all the other parts of the country I have been, the people are friendly and helpful, Laos most valuable resource.

Wat Phou is an ancient Hindu temple site believed to date all the way back to the 5th century.  It is about 10 kilometres from Champasak, built on the Mekong River plain and  on up into the sacred mountain. At the peak of the Khmer dynasty about a thousand years ago, Wat Phou was connected by road to Ankor Wat in Cambodia, some 400 kilometres away. Having been to Ankor Wat, it is hard not to make some comparisons between the two.  While the Ankor Wat ruins are much more vast and spectacular, the setting of Wat Phou is a winner with the mountainous backdrop. Also, Wat Phou has a tiny fraction of the visitors of Ankor Wat,  making for a more relaxed, carefree experience.

Like Ankor Wat, there are a couple of large,  man made reservoirs in front which lead to the building structures, built in Hindu style over 1000 years ago.  It you keep exploring upwards you arrive at the small temple on top and can even drink from the sacred spring pouring from the rock face at the back of the temple. All and all, really enjoyed the Wat Phou experience. 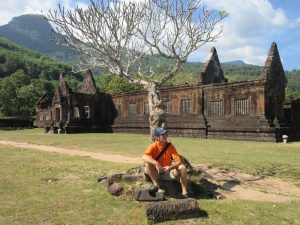 Other than Wat Phou, Champasak is a great place to unwind, I could not get enough of the sublime Mekong views.  Ventured around town by bicycle a few times and though not many options found some great food and drink.  Had a funny incident with the bicycles which will give you an idea of how ‘small town’ this place is.  One night ventured out to riverside restaurant for dinner and Beer Lao. Parked the bikes that we borrowed from our guesthouse basically inside the place as there was plenty of room. I asked the staff and they said no need to lock up.  By home time the place was doing a good business with more folks and bicycles.   Saddled up and headed home.  One of the bikes had a headlight which I hadn’t noticed before but was thankful for, as there are scant few streetlights.  A day or 2 later went on another  afternoon venture that went the whole length of  town and on the way back home stopped at favourite eating spot Homemade.   We parked the bikes and were just chatting with the owner going inside when two Lao guys rode up on bicycles in a bit of hurry.  I recognized them as staff from the restaurant the other night.  They started speaking mostly in Lao, pointing at the bicycles.  Luckily the owner was there to translate.  Apparently we had taken the wrong two bicycles home the other night! I guess these guys knew in such a small place they just had to bide their time until they saw us/bicycles again and they would spring into action and straighten things out.  They had ridden our original  bikes there so it was quick and painless to swap back the bikes.  Never had anything like that happen before!

There you have it,  Champasak is a great place to unwind Lao style in a beautiful setting with easy access the impressive Wat Phou temple site to get an idea of the ancient history of this lovely region of the world.

Champasak
Sleeping
Nakone Guesthouse- probably the best place to stay, The hosts name is One and she does it all, quite helpful.  Food is good in lovely riverside restaurant setting, though a bit pricey. Try get room with Mekong view. A few bicycles available for guest use. Price $32 nightly direct booking.  Conveniently located in town .

Eating
Homemade-  Don’t let the rough concrete floor put you off. The excellent food, friendly host and laid back atmosphere more than make up for this.  Had a couple of great meals there. Must try the Mekong fish and the nam khou rice.  Drinks are good as well and very affordable.

When to go:
Went is mid-November and weather was fantastic.  Warm to hot in the daytime and cooling off at night.

Sights
Wat Phou – Entrance fee is 50,000 kip per person, includes museum and buggy ride to/from the building site.  It is about 10 kms from Champasak, cycling there is fine if weather is not too intense.
Tourism Office- Be sure to pop in for a visit here soon after you arrive.  The guy there was a wealth of information about the sights, transport, etc.  He mentioned that at high season there are a lot of boats going between Pakse and Champasak and the rate sounded quite affordable, around 70,000 k per person.  The boats can be caught right in front of the tourism office.

A Short But Sweet Tour of Central Europe in Croatia, Slovenia and Hungary

After a long travel drought due to C19 restrictions, this late-autumn tour of Central Europe got my

Travel in the Time of Covid

I am not much of breakfast guy, usually not hungry in the morning, however one breakfast I