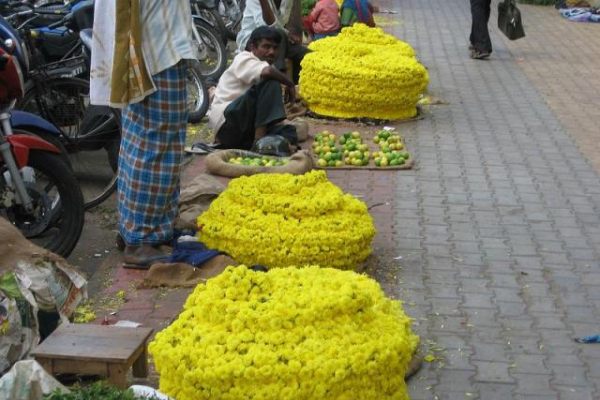 I was caught off guard when the madness of India began before I even left Thailand. I booked my flight to India online with the popular Indian airline called Kingfisher about a week before departure. I was surprised that at that time it seemed like there were a lot of seats available at a very affordable price. When it came time to check in for the flight at Bangkok that seemed to have changed dramatically with big lineups of moustachioed Hindu men. And giant screen TVs as far as the eye could see! I would say well over 50 of the men were each checking in a giant TV and some massive duffel bags of textiles on the side for good measure. I believe what happened is that because the flight was fairly empty some businessman approached the airline or vice versa, and got a sweet deal for a big chunk of tickets. A bunch of guys were then recruited to bring back whatever the most money could be made off of. Unlike Thai people, Indians don’t really follow the concept of lineups or queues. They was plenty of jostling, raised voices, even some of the Indian “almost” fights that happen often were there is a lot gesturing and shouting but no one ever throws a punch. The Thai airport security was frazzled in no time. It certainly made check-in and getting luggage after landing a pain in the butt.

My first train in India was on Shatadbi express train from Bangalore to Mysore which I booked myself. Booking a train in India is an overly complicated, time-consuming venture best left to professionals IE travel agents. If you find yourself at the train station booking area trying to procure a ticket the first thing you need to do is get a number from the ticket queuing machine. Now you have fill in ticket request form with your details, train arrival/departure places and times, class of seat, train number, etc as if you know all this information. Now you wait for your number to be called to see an agent. If you filled in the form correctly and have the exact change you should get a ticket, otherwise it may to the back of the line for you. My first try was successful! The Shatadbi express was great with big comfy seats, AC and even a decent little meal. It was only a two hour ride but you have to start somewhere.

I wanted to check out Goa and this trip looked like a good opportunity to investigate the train travel more in depth. I recently watched a movie called Darjeeling Limited about three brothers traveling across India by train and I loved it. Their experience in a clean, private compartment was quite different from me traveling some classes lower. For my night trip out of Mysore, I got class 2A which I think means 2nd class with upper and lower bunks and AC. There is a curtain you can pull across for privacy to your bunk and blocking out light. On my return trip from Goa I could only get class 3A which meant the bunks were three high and they didn’t have a privacy curtain, which was not my cup of chai. I boarded the train in Mysore about 8:30PM and about three minutes after sitting down in my seat I saw a couple of cockroaches climb out of the armrest across the aisle, a disheartening start. I guess roaches need to get out and travel too. The bedding is sitting there for you to make up your bed whenever you like. I turned in about 9 as usual on the yogic schedule. The night train was not so bad and it arrived in a city called Hubli around 7am where I had to transfer trains.

On the train from Hubli to Goa the AC seats were fully booked, so I believe I traveled class 3. This was nice in a way because it’s less touristy and now I was traveling right amongst the Indians. This ride is a scenic mountainous journey with 14 tunnels along the way! It is very funny going through the tunnels as the people in the lower class cars hoot and holler like crazy as the train enters the darkness. I chatted with my neighbors along the way and one guy gave a lot of good advice on the bus transport I would want to take when we arrived. He suggested it would be easier if I took the train one stop past where my ticket was for, which I had been thinking of doing anyways as it made sense geographically. As I am exiting the station wouldn’t you know it there were people actually checking the tickets.. I really was not expecting this and had no smooth talk forthcoming when they saw my ticket was not legit and I got hauled off to the office. The manager there said he had to charge me 100 rupees minimum fine. I groaned as my total ticket was only 108. He then says he really should be charging me 200 Rs but he will let me go with 50Rs. As I pay out the 50 he says “:Actually Sir I should have charged you 350 Rs”. It seems it is a highly variable fine system.

I made my way from the train station to the government bus stand only a block or two away. The government bus system is kind of funny because rather than just getting on the bus and paying you have to queue up at a stand and buy a ticket, then get on the bus. I got my ticket and it was off to Panaji, one step closer to my destination in north Goa. Traffic in Goa is terrible and it was particularly bad this day as there had been some tribal demonstration earlier in the day which had traffic really backed up. At Panaji I caught another bus to Mapusa and from there another bus to Anjuna. All these buses were absolutely crammed full and I was so glad I was traveling light on this journey! Between my train being three hours late and all this bus travel time I was going to arrive in Anjuna around 8PM instead of early afternoon which I had planned on. At Mapusa I thought I better call the hotel and let them know I am still coming. Someone eventually answered the phone and said the reception is closed for the night, I would have to call back in the morning. I said “PARDON???”. This is not what I wanted to hear after this travel odyssey. The guy eventually said to call back in an hour and the manager would be around to talk to. I called back and the manager said “Of course come, we’ve been expecting you”. What a relief it was to finally arrive at the wonderful Grandpa’s Inn.

The auto-rickshaw is the main type of taxi available in Indian cities with a hot climate. It is basically a three-wheeled motorcycle with a square, open-sided cab with a seat in front for driver and a bench seat in back for passengers. The open sides are great because you really get to see what is going on around you and you catch a nice breeze. It can also be handy if you end up piling in four, five maybe six people on the seat meant for three as various body parts can hang out the sides. In Mysore almost all the rickshaws have meters but the drivers are usually rather reluctant to use them. Let the negotiations begin! The drivers were usually decent to deal with and a typical trip would only cost about 30 rupees (70 cents). I really enjoy riding the rickshaws, probably my favourite mode of Indian transport.