A major highlight of my travel in Sumatra, Indonesia was an opportunity to see some of the few remaining orangutan in their native habitat.  Bukit Lawang is the ideal place to do this.  It is located between seemingly endless palm plantations and an impressive jungle park, the Gunung Leuser National  Park. 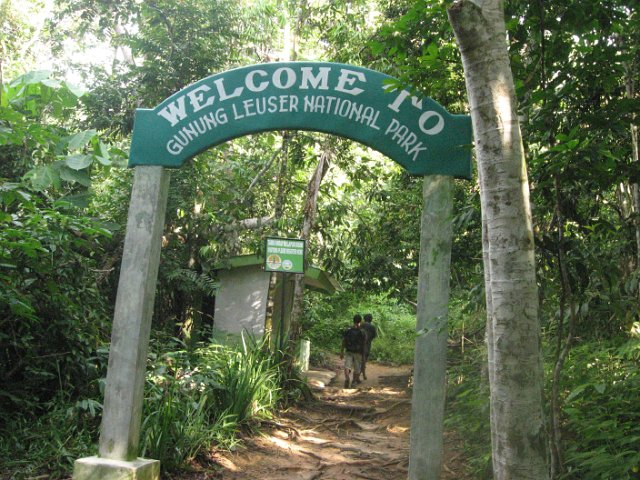 After an agonizing journey from the nearest city Binjai, I arrived at Bukit Lawang  in the midst of a colossal thunderstorm.  It was raining buckets and I have never felt thunder so powerful, it made the earth shake. Welcome to the jungle!  The final bit of my journey was to cross over the river on a rickety foot bridge that was swaying side to side in the pouring rain.  It was dark out but there was just enough light to see how much the river was raging below, it was a little freaky.   I was sooooo happy to finally arrive at the guesthouse.

The locals here are really great, friendly and accommodating right from arrival.  I took my first full day there to recover from travel and get my bearings in this small riverside village. As I was wandering around town somewhat lost,  one of the guys who helped me get settled during  the storm the night before, Sonny, came upon me on his motorcycle.  We chatted a bit and he invited me to his humble family home just around the corner. for tea.  I knew Sonny was a jungle guide and during tea he showed me many photos of his jungle adventures. It was soon clear he was not your run of the mill guide, he had been working with the orangutans in various roles since the 80’s. He even had a proper hard cover book of one of his tours that the family he guided made and gave to him.  This sealed the deal, I booked a whole day in the jungle with him.
In our group there were two other fellows on tour, Barry from Australia and his Indonesian friend, as well as a junior guide to help out and learn from Sonny.  We all met at my guesthouse and trekked the few kilometers into the jungle park from the village. Though a lot of uphill, it was pleasant, easy walking on the main path with lots of shade. Further on, Sonny took us off the beaten path to avoid the other tour groups.  It did get a little tricky going up and down some slippery slopes without much of a path but we powered through. There were taller trees then I have ever seen before,  my neck was hurting gazing up to the lofty treetops.
It wasn’t long before we had our first sighting, a rather massive male orangutan. Sonny knows all these orangutans personally and recommended we keep our distance from this big boy, enough said.   Some of the females were okay to get closer to, though one almost grabbed one of my fellow tourists backpack. Orangutans look all fun and games but they are incredibly powerful from nonstop tree-climbing and have pretty impressive  chompers to boot.
There had been a orangutan rehab center  for 40 years in the park including a feeding station but this has been recently closed.  I think it would be fair to say most of the adult orangutans that live by Bukit Lawang are semi-wild, as they most likely spent time in the rehab center.   Many of these orangutans were orphans and likely suffered at the hands of man along the way. There is one female named Minn Na that has become infamous  for giving back to humans a fair bit of grief. Apparently there are over 100 documented cases of her biting people, the large majority being the local guides. Towards the end of our tour, Sonny heard some crashing in the jungle and suspected it was Minn Na coming towards us.  He told us to get a move on as quick as we could  out of the jungle while he headed towards the noise to try divert the unruly orang if necessary. Thankfully we didn’t have any incidents.
We saw plenty of orangutan, I lost count after 10.  There were many other primates to be seen, including long tail macaques, the elusive gibbon and the uber cute Thomas leaf monkey. 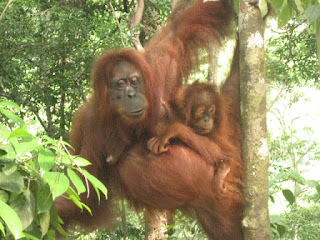 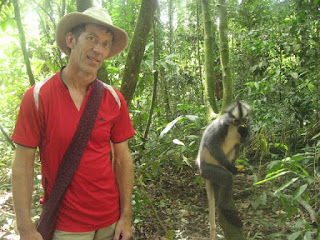 If you have a chance, I highly recommend you visit the orangutans at Bukit Lawang.  Besides being a really amazing experience,  it definitely helps conservation efforts when local communities like this can support themselves with eco-tourism rather than the dreaded palm plantations that are putting the orangutans and the environment in general at great risk.
For more photos of my Bukit Lawong adventures you can click these links:
http://jalbum.net/a/1727640
http://jalbum.net/a/1727641
http://jalbum.net/a/1727705
Sleeping:  I stayed at the Bukit Lawang Indah,  a guesthouse with a good atmosphere on the jungle side of the river.  The rooms are large and basic with attached bathroom. No towels, soap or blankets provided.   At 50,000 rupiah/night I  have no complaints whatsoever.  If you do stay there, you should at least book your jungle tour through them so they make a bit of money. Next time around I may try out Thomas retreat (mid-range) or Ecolodge (high-end)
Eating:   Good food surprisingly affordable at at the lovely riverside Ecolodge restaurant, stick to Indonesian dishes.   Nifrita is a small warung close to the big bridge, great rendang.
Coffee:  Best was at Lawang Inn 20,000 rupiah.  Thomas Retreat made a good local style coffee for only 5k.
Getting There:  I do not recommend the way I got there by local bus, worst travel day ever. Taking a shared taxi from the Medan airport should be okay and affordable with Nice Transport, with a stand just outside the airport to the right.  Better still would be to have your guesthouse arrange airport pickup for you at Medan, this costs about 700,000 rupiah for the car.